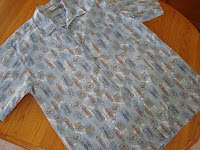 After the degree of difficulty of the Edward bears, I wanted to do something a little easier. I chose this shirt because I knew there would be no pattern matching and I also knew the fabric would be nice to work with. Plus, it was requested by Mike's daughter and that touched me. I'm still not ready to make one with my dad's shirt, but I sure could start on one for another daughter.

I cut all the pieces out on a Sunday, planning to put Mike bear together the next weekend. You know what happens when you make plans, right. The Thursday before the planned weekend, my mother had two strokes and my family's life took a new direction. I had no idea when I would be back to sewing or even back to my own home. I considered turning the pattern pieces in and asking someone else to make the bear, but I really didn't want to do that. Fortunately, my family all pitched in and after a couple of weeks, I did have some free weekends to sew. 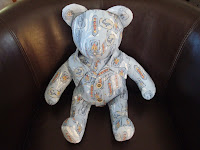 Getting back to sewing the bear was a pleasure. It gave me the opportunity to focus on something other than my job and my mom, which was important right then. The bear went together so easily, I was amazed. I wonder if Mike was an easy-going kind of guy. The pieces went together nicely, there wasn't a lot of fraying on the edges so I didn't have to use any lining, and the weather was nice and cool. Who could ask for more? 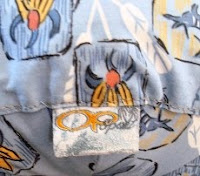 I made a little pocket for the front, turning the fabric wrong side out. I did the same thing for the soles of the feet for contrast.
I did a little something different with this bear, adding the tag to the bottom of the back pocket. I think it looks a little like a tail and it adds a touch of whimsy to the bear. I hope Mike's daughter likes it!
Posted by Laurie at 7:37 PM 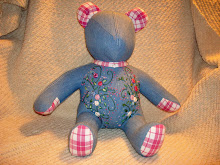 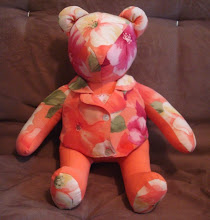 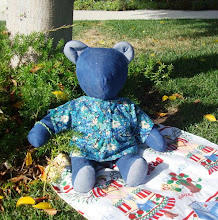 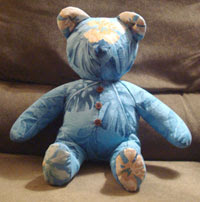